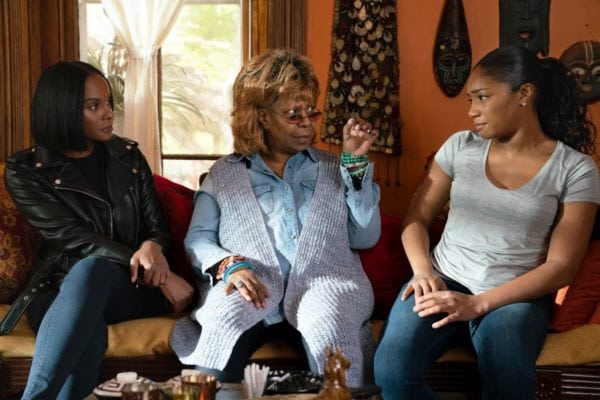 Plot
Tanya (Tiffany Haddish) has been released from prison after spending five years. Her older sister Danica (Tika Sumpter) is a brilliant marketer working for an advertisement firm and she is tasked with housing Tanya because their mother (Whoopi Goldberg) refuses to house her.
Once Tanya is released from prison, we learn that she and her sister are like chalk and cheese. Tanya is unreserved and for lack of a better word, ghetto. Danica is reserved, lives in a high rise fully furnished apartment with a fancy kitchen filled with wine. Danica seems to be living the dream of many young black women but we learn that she was recently dumped by a man she planned on marrying and soon afterwards started dating a man she met online whom she had never met or seen. When Tanya hears of this, she immediately contacts the popular Mtv show Catfish and so the crew arrives, a cameo by the Catfish duo was actually enjoyable. Danica learns that she has been duped and her heart is broken but she mends it by stirring up a relationship with a coffee shop owner (Omari Hardwick) whom she had been ignoring because, well he’s a coffee shop owner and a former convicted felon but this relationship does not run smooth. The cat in catfish is still in the bag and when it jumps out, it complicates matters further.

Performances
Whoopi Goldberg’s character was perfect for this movie and she served one of the most hilarious scenes. Mechad Brooks was a surprise, I only viewed him as the boring James in the Supergirl series but he also performs, giving the audience unexpected laughs.
There are a lot of characters in Nobody’s Fool, Danica’s was one of the strongest and it is unfortunate that it was not explored more, she is pivotal to the movie but the right beats were missed in her scenes with other characters. She bottles up a lot of anger, is a hard worker, is caught up in illusions about romance but is also stuck up- none of these attributes were excavated well, the character fell flat where many arcs were possible.
Amber Riley makes an appearance as Danica’s best friend, an unchallenging role and Chris Rock has a crude cameo. Tiffany Haddish keeps the movie upbeat but her character could also have been developed better. I understand it’s a movie for lazy and quick laughs but a pinch of seriousness would not have altered the high spirits of the character. I guess there’s a thin line between drama and comedy.

Verdict
Nobody’s Fool is not for the serious, it is directed by Tyler Perry after all but it is truly enjoyable.